TOKYO, July 25, 2021 /PRNewswire/ — Team Germany continued to build up a head of steam when moving to the top of the Dressage Grand Prix leaderboard at the Tokyo 2020 Olympic Games today. Two great rides, from Dorothee Schneider with Showtime and the living legend that is Isabell Werth with Bella Rose, secured pole position at the end of the competition which decided the eight best nations that will go through to Tuesday’s medal-decider, the Grand Prix Special in which all teams start from scratch. 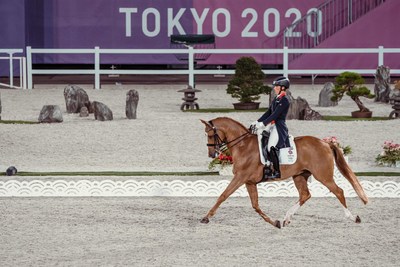 Denmark’s Cassoe Kruth and America’s Lyle claimed the top two spots in Group D when the action resumed this evening, and then Germany’s Schneider headed up Group E after a lovely test.

Compatriot Werth headed up the final group of 10 horse-and-athlete combinations and, last to go tonight, underpinned the solidity of the German challenge. With her beloved Bella Rose who scored 82.500 she pinned Great Britain’s Charlotte Dujardin and the charming little chestnut gelding Gio into second place in that group. However both of these ladies look to have a lot more in store for the coming days. You could feel that rivalry between herself and the evergreen queen, Werth, filling the air once again tonight.

Werth clearly enjoys the renewed rivalry with her British counterpart because it feeds her competitive edge. She described the 17-year-old Bella Rose as “my dream horse and when she’s in top shape she is the best.

Images available on FEI Flickr for editorial use only.

Follow all media updates and competition results throughout the Games.

Click here for more information on Equestrian at the Olympic Games