Each year, Indiegogo celebrates products and campaigns in a number of categories and grants an award to one campaign in each category. 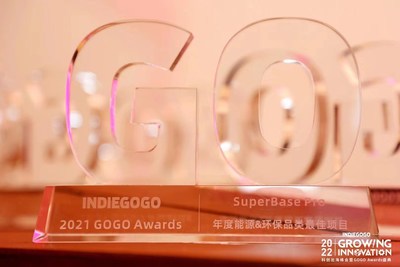 SuperBase Pro 2000 features IoT and GPS hardware, offline UPS functionality, and an intelligent companion app with remote control and green energy tracking features. Users earn green energy points through the app, which can be used to plant real trees around the world. The power station has built-in industrial grade wheels and an extending handle for maximum portability, and can deliver up to 4,000W of surge power. SuperBase Pro can be recharged to 80% in just one hour, and fully charged in two hours.

Zendure’s power station SuperBase Pro has 14 output ports (12 in the EU model), plus a companion app that can control the inputs and outputs, track the power station’s location, and even keep track of carbon offset through the use of sustainable energy. This is all possible thanks to the power station’s built-in Wi-Fi, 4G, and GPS hardware.

Zendure is a portable power company with a focus on sustainable energy located in Silicon Valley in the United States and the Guangdong – Hong Kong – Macao Greater Bay Area in China. Since its establishment, Zendure has continuously launched innovative products, made rapid breakthroughs in the core technologies of energy storage and power supplies, and continues to bring pleasant surprises to the user experience. The company recently received a multi-million dollar series-A round of funding through a joint investment from Shanghai GP Capital and YOTRIO group.

Claflin University Receives $500,000 from Bank of America to Support The Center for Social Justice

With Market Size Valued at $181.9 Million by 2026, it`s a Healthy Outlook for the Global Carbon Disulfide Market