HOHHOT, China, Aug. 16, 2021 /PRNewswire/ — On August 12, World Elephant Day, Yili Group and the China Green Foundation announced that they will work together to restore the habitat of Asian elephants. The two partners will support the development of wetlands and salt mud ponds and the scientific cultivation of plants that elephants like to eat, restoring a habitat spanning 50,000 square meters. 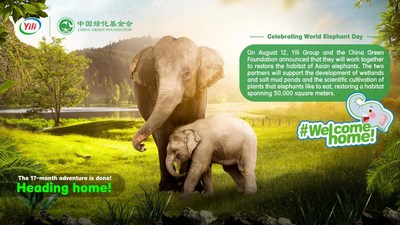 Beginning in March 2020, a herd of wild Asian elephants started wandering northwards from Xishuangbanna Dai Autonomous Prefecture in China’s Yunnan province and quickly made international headlines. Rather than creating conflicts between the elephants and people, this long march has been warmly welcomed and supported by the residents along the route as well as by the wider public. After an epic 17-month journey, the elephants were recently guided across the Yuanjiang river, the most challenging obstacle on their southward journey, and a path was made for them to safely return to their nature reserve.

Yili’s new endeavor is mainly aimed at addressing the most urgent current issues in protecting Asian elephants, an endangered species listed on the IUCN Red List and one of the leading protected wild animals in China.

In recent years, as China continues to strengthen its protection of Asian elephants and their habitats, the number of wild Asian elephants in China has gradually grown from about 150 to 300. However, managing the rising number of Asian elephants and their expanding habitat range now requires new solutions. Some elephants are currently faced with a scarcity of the low shrubs and herbs that they prefer to eat. When the food supply dwindles, they will then leave the forests and wander into villages in order to forage outside the reserve. In addition, new problems such as rapidly declining acreage and scattering habitats are urgently in need of being addressed. Unless such challenges are resolved, the issue of wandering elephants will continue to reoccur.

To protect Asian elephants as well as other wildlife, Yili, as the first Chinese company to sign the United Nations’ Commitment Letter of Enterprises on Biodiversity, has made significant efforts aimed at strengthening biodiversity conservation. To protect forests inhabited by wildlife, Yili’s Satine milk uses FSC-certified packages and introduces organic lids partly sourced from sugarcane, a recyclable and renewable resource. In May 2020, Yili and the Embassy of China in Kenya, the United Nations Environment Programme (UNEP), and the Kenya Wildlife Service, jointly launched an online public donation event for Kenya wildlife protection which led to 4.56 million kenya shilling (KES) worth of materials being donated to Nairobi National Park to help protect African wildlife.