UTS researchers in the Climate Change Cluster (C3) have partnered with PSI – the world-leading manufacturer for biological sciences instruments – to develop and install an automated robotic system that screens thousands of types of algae each day. 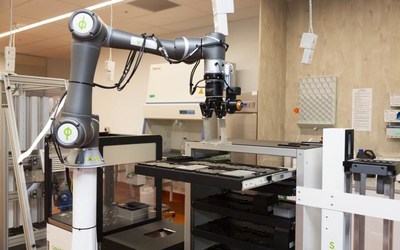 Algae are microscopic aquatic plants that, when grown in a bioreactor, soak up carbon from the atmosphere up to 40 times more efficiently than trees. With the right traits, these algae can then be used in industries such as food and beverage, textile fibre, bioplastics and biofuel.

“Our collaboration with PSI…is a game changer in the pursuit of using ‘super algae’ to combat climate change, and will create a new algal biotech industry here in Australia,” says Distinguished Professor Peter Ralph, Director of C3 at UTS.

“For every algae species we have in culture, there are hundreds of thousands that are yet to be identified. By drastically accelerating the discovery and characterisation of using this advanced tech, we are unlocking enormous potential for industry to quickly utilise ‘super algae’ to decarbonise their manufacturing processes.”

Previously, it took scientists around six months of manual, full-time experimental work to identify the traits of one single strain of algae. This new technology enables that same strain of algae to be analysed in just one week.

“UTS is leading the way in characterising and better understanding how super algae can play a critical role in decelerating climate change. For this reason, we believe that Australia can be on the forefront of this field, developing new technologies and providing vast benefits to industry. In turn we should see significant revenue increase in end user companies as well as new job creation,” says Martin Trtilek, Founder and CEO of PSI.

After installing the Algae Phenotyping System, UTS and PSI will adapt the system to analyse traits in different strains of seaweed. The seaweed-focused industry is estimated to be worth US$15 billion.

The University of Technology Sydney (UTS) is a leading university of technology and ranked #1 in Australia for AI Research, Computer Science and Engineering. Discover more at uts.edu.au.