The road to COP26: Fifth Wall Launches Mural in Glasgow as part of its international “Choose Earth” Campaign

LOS ANGELES, Oct. 29, 2021 /PRNewswire/ — Today, Fifth Wall, the largest venture capital firm focused on technologies for the global real estate industry, launches a mural in Glasgow as part of its international campaign to bring public attention to the real estate industry’s need to invest in climate technology now. It is the first of an ongoing series of murals that will be installed as part of Portrayals’ visual story-telling projects across Scotland in the lead up to and following the UN Climate Change Conference, COP26, using street art to inspire and express what science alone cannot. Fifth Wall’s campaign began in late September in New York City, timed with ClimateWeek, followed by a second mural in October in Los Angeles, timed with the Milken Institute’s Global Conference. 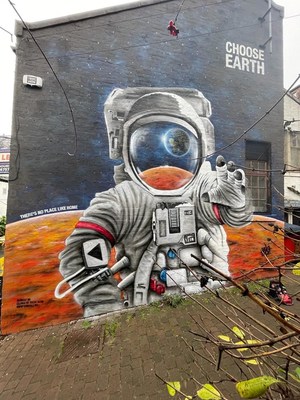 The mural features the headline “There’s No Place Like Home. Choose Earth.” and the installation depicts an astronaut on Mars longingly reaching toward Earth. The multi-city mural campaign pokes fun at the current billionaire space race while encouraging people to first prioritize our planet — a topic which has recently been called out by Prince William, who urged companies to repair this planet before exploring multi-planetary civilization, and Bill Gates, who noted that “we have a lot to do here on Earth.”

The mural is located on the gable end of 5 Cresswell Lane in Glasgow’s West End and was created in collaboration with BBMG, a branding and social impact agency, and Glasgow artist Bobby McNamara, better known as “RogueOne”. McNamara is one of Glasgow’s most well-known muralists, responsible for various eye-catching pieces throughout the city. He has been creating street art for over 15 years and uses it as a way to raise awareness for important topics often disregarded by the public that directly affect his beloved hometown.

“The idea behind this mural is to playfully suggest that visionaries like Elon Musk, Jeff Bezos, and Sir Richard Branson prioritize real-world solutions to combat climate change and reduce carbon emissions on Earth before building on Mars,” said Bobby McNamara. “I’m thrilled that Fifth Wall chose me for this project because it’s a cause I personally stand behind. Being able to express this through my art and in my hometown is a true honor.”

The Glasgow mural aligns with the largest international climate change conference, COP26, which aims to bring countries together to accelerate positive action towards reversing global warming. COP26 has dedicated November 11 to focus on the Built Environment. Accounting for nearly 40% of global energy, greenhouse gases, and raw materials, the real estate industry is the world’s largest contributor to the climate crisis. It is estimated that $15 to $20 trillion will need to be invested into technologies to decarbonize the real estate industry. Unfortunately, most real estate firms are not investing nearly enough into this critical climate technology, and this is what Fifth Wall’s mural campaign seeks to highlight.

“We must prioritize Earth and to do so we need companies, especially real estate companies, to make critical investments into climate technology. Climate change is a collective action problem that requires a collective action solution, so it is important that everyone across all industries do their part to decarbonize the economy,” said Brendan Wallace, Co-Founder and Managing Partner at Fifth Wall. “The real estate industry has historically underinvested into the climate technologies that are needed for the industry to decarbonize. We want to draw awareness to this underinvestment and offer a solution, and that is what this mural campaign and our Climate Tech Fund is all about. Fifth Wall’s Climate Tech Fund represents an ever growing consortium of real estate firms that are committed to decarbonizing their industry through investments into climate technology — the largest pool of capital ever assembled to decarbonize the Built Environment.”