Smart Cities Pivot to Hydrogen and Other Priorities, Reports IDTechEx

BOSTON, Feb. 3, 2022 /PRNewswire/ — Smart cities face new, exceptional challenges with new exceptional technologies. Those starting from scratch have seen a shakeout for reasons varying from push-back against people control to failing to raise the money. In contrast, work has begun on the NEOM smart city in Saudi Arabia and the more modest Toyota Woven City at the base of Mount Fuji in Japan that is, in some ways, more advanced. The IDTechEx report, “Smart City Materials, Systems, Markets 2022-2042” has the analysis and forecasts. 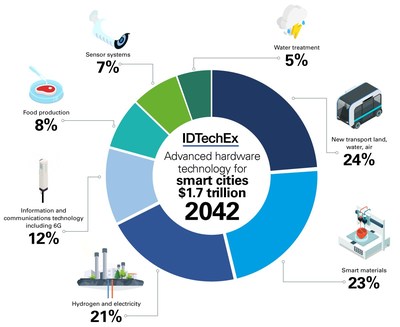 New directions are the order of the day. Toyota now promotes its priority as a hydrogen economy, escaping from the natural gas and other fossil fuels dragging us to oblivion. Japan is backward in cleaning up its grid so we can expect solar everywhere in Woven City as in all others. That means a lot of distributed energy storage that can assist national grids but look closely and things are pivoting. Lithium-ion batteries for short-term stationary storage may well be replaced with greener, more affordable, longer-lived sodium-ion batteries without the scarce metals. Even the world’s largest battery maker CATL has announced one.

Overall, the simplistic objective of a “hydrogen economy” is giving way to using the right technology for the right application. NEOM in Saudi Arabia is to be “the first cognitive city, where world-class technology is fueled with data and intelligence to interact seamlessly with its population” but that includes massive industry creation – jobs. So-called OXAGON forms the next phase of NEOM’s master plan “representing a radical new model for future manufacturing centers, based on NEOM’s strategies of redefining the way humanity lives and works in the future”. OXAGON will establish the world’s first fully-integrated port and supply chain ecosystem. The port, logistics, and rail delivery facility will be unified, providing world-class productivity levels with net-zero carbon emissions, setting global benchmarks in the adoption of technology and environmental sustainability. These industries are sustainable energy; autonomous mobility; water innovation; sustainable food production; health and well-being; technology and digital manufacturing (including telecommunications, space technology, and robotics), and modern methods of construction; all powered by 100% renewable energy, they promise.

NEOM will doubtless use hydrogen for cooking and industry.  Nonetheless, the gorgeous Lucid battery electric car with its record range is a Saudi investment and it is likely to be made in NEOM.  Indeed, NEOM is already partnered with Volocopter the delivery and passenger drone company using batteries. Saudi Arabia is rapidly moving to solar desalination near cities for virtually all its water.

Hydrogen is a strong part of the industrial chemicals industry worldwide, including the associated ammonia business. The impending large market for energy storage electricity-to-electricity will have a new dimension of seasonal storage for solar weak in winter and for wind outages of months. Here hydrogen is a strong candidate and gravity storage lifting huge weights is a contender. Wisely, the Saudis have strongly invested in both. Meanwhile, NEOM plans the world’s largest green hydrogen project involving Air Products and ACWA Power, the world’s largest and most advanced modular building construction factory with Gulf Modular International and the largest hyperscale data center in the region, with FAS Energy.

Existing cities can rightfully call themselves smart when they head towards zero emissions and happier users with more affordable new technologies. Dubai placed the world’s largest order for battery robot shuttles – a totally new form of transport.  Other existing cities are taking leadership positions from making food with almost no water to tapping the waves and tide to make electricity as sea levels rise. London will see all new buildings with electric car chargers fitted and other cities plan all new buildings being solar. But hydrogen or electric economy? That is proving to be as daft as betting when everything will be painted yellow.

Greater Commercial Lending Helped Obligate Over $250 Million in USDA B&I CARES Act Loans, Among the Most of Any Participating Lender