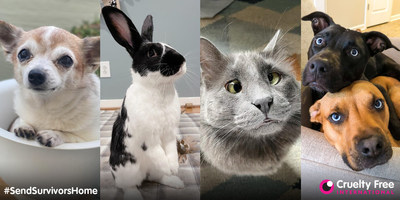 “We’ve enlisted several well-loved animal influencers to raise the public’s awareness about the CARE Act and how they can easily encourage their U.S. representatives to support it, which could save thousands of lives a year,” says Monica Engebretson, Head of Public Affairs North America at Cruelty Free International. “The #SendSurvivorsHome campaign, which will run throughout the month of November, will focus on the themes of home, family, and love afforded to adopted animals and ask viewers to help give laboratory survivors that chance.” Influencers thus far maintain a collective following of nearly 1 million people across TikTok, Instagram and Facebook and include:

Over 200,000 dogs, cats and rabbits are tested on in the U.S. each year—the majority of whom are killed after the experiments end, even when they have years left to live healthy lives. While animal rescues and potential adopters are ready to bring them into homes, currently only 13 states have laws governing the adoption of companion animals from laboratories that no longer have use for them.

The CARE Act (H.R. 5726), sponsored by US Representative Tony Cárdenas (D-CA), would require laboratories that receive tax-payer funding from the National Institutes of Health to develop adoption policies for dogs, cats and rabbits who are no longer used for research, including implementing transparent record keeping for the achievement of such requirement, and making them publicly available on their websites.

For more information and to connect with their U.S. representatives, readers are encouraged to visit: sendsurvivorshome.com. Additional media assets can be found here.

Cruelty Free International is one of the world’s longest standing and most respected animal protection organizations. The organization is widely regarded as an authority on animal testing issues and is frequently called upon by governments, media, corporations and official bodies for its advice and expert opinion.

Cadiz Inc. Issues Statement in Response to News that California Water Districts Will…