GLASGOW, UK, Nov. 5, 2021 /CNW/ – The organizations in charge of some of the largest tracts of protected landscapes and marine environments on the planet, including Parks Canada, have come together for the first time to invite world leaders to support the work of the global Protected Areas and Conserved Areas family as the vanguard of the fight against Climate Change and Biodiversity loss. 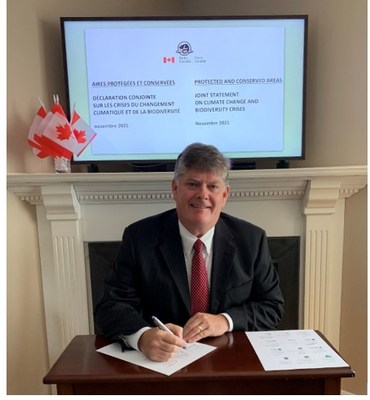 In a joint statement led by National Parks UK, as the host nation for this year’s United Nations Framework Convention on Climate Change (UNFCCC) Conference of the Parties (COP) 26, signatories acknowledge that no single site or organization can address the global crisis of climate change nor the exacerbating impact of climate change on biodiversity loss. However, as a family of protected and conserved areas distributed all around the World, and focusing on collaboration and global ambitions for rapid and far-reaching actions to tackle climate change and biodiversity loss, our global network aspires to be the “first 30 per cent” that inspires nature-based solutions and informs land and sea use choices across the planet – the places where billions of people connect with nature and become inspired to play an active part in combatting the dual crises.

Parks Canada administers one of the finest and most extensive systems of natural and cultural heritage places in the world, which are a source of shared pride for all Canadians. Ron Hallman, President & CEO of Parks Canada Agency, signed the Statement virtually today, as part of the COP26 Youth Day events.

“Parks Canada is the oldest national parks service in the world and we are proud to protect some of Canada’s, and the world’s, most important natural treasures, both for their intrinsic beauty and for the rich ecological services that they provide. For us, it is crucial to join our voices with major organizations from all around the globe, and recognize that we all have a role to play in this fight against two of the greatest challenges of our time: climate change and biodiversity loss. Parks and protected areas in Canada offer an important nature-based solution to climate change, as healthy ecosystems help nature and people adapt to climate change. Parks Canada works with Indigenous communities across the country as partners in conserving our nation’s natural and cultural heritage and sharing the stories of these treasured places with all Canadians and the world. United for nature, we will all go further.”

“In the fight against biodiversity loss and climate emergency, if we fail here, we will fail everywhere. We’re star players, don’t leave us on the bench. Climate change is not confined within national borders, and I believe this unique agreement can help spread innovation and good practice to our collective benefit. In turn we can show the way for countries, landowners and individuals across the world – inspiring them to put nature and nature-based solutions at the heart of their thinking and their economic and life choices.”

“We are no longer at a point where we can have world leaders ignore the climate and biodiversity crises. We must act now. And we, as protected areas, have a duty of care to be the catalyst that sparks change. We know what we’re fighting for, so let’s fight.”

“Protected and Conserved areas are critically important solutions in combatting the twin crises of climate change and biodiversity loss simultaneously. Increasing investment in these areas can not only help safeguard biodiversity in both the terrestrial and ­­­­marine realms, but also help secure their role as important carbon sinks helping human societies cope with climate change impacts by reducing risks associated with climate-related hazards.”

Another perfect score for the third carbon market compliance period: 100% of emitters have covered their greenhouse gas emissions

TransAlta Recognized at COP26 Powering the World Past Coal Event