SEOUL, South Korea, June 9, 2021 /PRNewswire/ — The 2021 P4G Seoul Summit wrapped up its two-day meeting on May 31 with world leaders affirming their commitment to an inclusive green recovery and carbon neutrality. During the first multilateral climate summit hosted by the Republic of Korea, leaders from developed and developing countries discussed measures to respond to climate change and reaffirmed the expansion of support for green growth in developing countries and their commitment to the goal of the Paris Agreement (to achieve carbon neutrality by 2050). 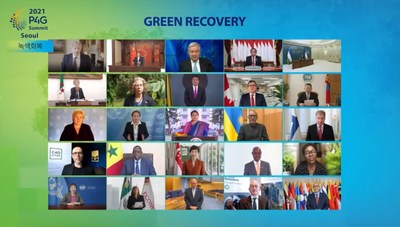 Major countries such as the U.S., U.K. and Germany expressed their determination to reduce greenhouse gas emissions in their countries and the world, and support sustainable growth in developing countries. During the Leader’s Dialogue on May 31, U.S. Special Presidential Envoy for Climate John Kerry noted that to get to net-zero emissions by 2050, three things need to be accomplished — an end to carbon-intensive fossil fuel use, the dissemination of clean energy technologies, and major investments in such technologies. He said the U.S. will double its public climate financing to developing countries by 2024.

During the Leader’s Session on May 30, British Prime Minister Boris Johnson said that no government can achieve a green industrial revolution alone and that international cooperation is imperative to create massive funds for climate response. He added that the U.K. will support the transition to a green economy through R&D investment and technology development. German Chancellor Angela Merkel said that Germany is making efforts to achieve carbon neutrality by 2045 and promised to faithfully fulfill its commitment to the international climate fund.

Leaders and top-level officials from Bangladesh, Vietnam and other countries said they will accelerate green growth and actively participate in global efforts for carbon neutrality. Prime Minister Sheikh Hasina of Bangladesh said the country adopted a 100-year sustainable development plan called Delta Plan 2100. She added that Bangladesh focuses on upholding the interests of countries vulnerable to climate change and promoting regional adaptation solutions. Vietnamese Prime Minister Phạm Minh Chính emphasized the need to strengthen capacity and improve conditions to respond to climate problems. He also expressed Vietnam’s willingness to cooperate for an inclusive green recovery, calling for a more harmonious approach in which developed countries continue to take the lead in mitigating emissions and all stakeholders participate in such efforts.

Chinese Premier Li Keqiang commented that for sustainable green development, international cooperation is essential, especially support to resolve difficulties faced by developing nations. China will contribute to a low-carbon, green recovery through its pledge to go carbon neutral by 2060 and organizing the 15th Conference of the Parties (COP15) of the U.N. Conference of Biological Diversity, he added.

The Seoul Declaration, adopted as the result of the P4G Seoul Summit, manifested the solidarity and resolve of the participant countries. The Declaration pronounces their commitment to overcome the COVID-19 crisis through a green recovery, limit the increase of the Earth’s temperature to 1.5 degrees Celsius, accelerate an energy transition away from fossil fuels, address marine plastics issues, and achieve Nationally Determined Contributions (NDCs) under the Paris Agreement.

The Declaration was endorsed by 38 participant countries, including Korea, the U.S., Japan and China, and by nine international organizations including the World Economic Forum (WEF), the International Renewable Energy Agency (IRENA), and the Global Green Growth Institute (GGGI). Angel Gurria, Secretary-General of the Organization for Economic Cooperation and Development (OECD), Fatih Birol, Executive Director of the International Energy Agency (IEA), and Bruno Oberle, Director-General of the International Union for Conservation of Nature (IUCN), also expressed their support for the Declaration in their private capacities.

President Moon Jae-in expressed his appreciation for the leaders in Twitter posts on June 3, after the close of the summit. In his tweet to U.S. Special Presidential Envoy for Climate John Kerry, Moon said, “We welcome the return of American leadership in responding to climate change. ‘Getting to net zero by 2050 is an incredible economic opportunity.’ I agree with your remark and look forward to strengthened collaboration between Korea and the U.S. in our fight against climate change.” In a tweet to Kristalina Georgieva, Managing Director of the International Monetary Fund (IMF), he said, “The three points you highlighted have enriched our discussion session,” referring to her remarks that a successful green transformation requires the world to embrace carbon pricing, green public investments and a just transition for the most affected.

Yoo Yeon-cheol, the Executive Director of the P4G Seoul Summit Preparatory Office said, “The summit is very meaningful for climate change response in that developing and developed nations got together to discuss their plans for green cooperation and express their commitment.” “Through the summit, which is the first-ever multilateral climate summit to be hosted by Korea, Korea greatly contributed to climate change response and the dissemination of the new green paradigm. Also, this event will become an opportunity to go beyond climate change discussions centered around developed nations and drive an inclusive green growth that engages everyone,” he added.

P4G (Partnering for Green Growth and the Global Goals 2030) was launched in September 2017, led by Denmark, as a global initiative to accelerate the response to climate change and the achievement of the Sustainable Development Goals (SDGs) through public-private partnerships. Of the 17 SDGs set out by the United Nations in 2015 with the aim of achieving them by 2030, P4G specifically targets five objectives related to climate change (food and agriculture, clean water, clean energy, sustainable cities and circular economy). Twelve countries – the Republic of Korea, Denmark, the Netherlands, Vietnam, Mexico, Chile, Colombia, Kenya, Ethiopia, Bangladesh, Indonesia and South Africa – as well as international organizations (including the World Economic Forum and the Global Green Growth Institute) and private companies participate in the summit. P4G – is a consultation group consisting of governments, companies and civil society organizations, -puts an emphasis on action-oriented public-private cooperation, – is composed of middle-power countries (playing the role of a bridge between developing countries and developed countries) – seeks to build a sustainable business model (a bridge between development and investment).

Curio Announces Appointment of Melanie White as Director of Communications

Curio Announces Appointment of Melanie White as Director of Communications