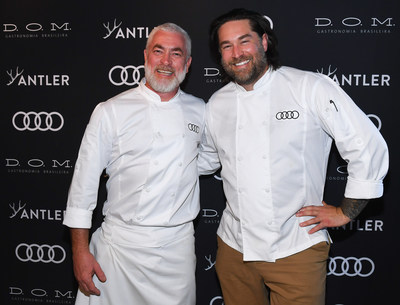 “As Audi continues its rapid pace of innovation within the electric vehicle category, we continue to focus on sustainability in all facets of our business,” said Audi Canada President Vito Paladino. “Having these two chefs come together to create this unique and sustainable dining experience, followed so closely after we launched this program with culinary giants Chef Alex Atala and Chef Michael,” concluded Mr. Paladino.

For the first dinner in the series, famed Brazilian two-Michelin-star chef Alex Atala of D.O.M. Restaurante and Netflix’s Chef’s Plate collaborated with fellow chef and friend, Michael Hunter of acclaimed Toronto restaurant Antler. With sustainability partner Audi Canada, they came together to create an evening that showcased the best of Canadian and Brazilian ingredients for a once-in-a-lifetime meal — featuring six courses of spectacular dishes using ingredients like foraged wild leeks and mustard greens. The menu was capped off by Atala’s famed Amazonian ant atop a maple tarte, which had been inspired by Atala and Hunter’s trips into the Ontario wild foraging and hunting in the days leading up to the dinner.

The event took place just as it was announced the famed Michelin guide would be arriving in Canada —much to the delight of Canadian foodies. Together they demonstrated the possibility of local, sustainable ingredients and their important place in cuisine, along with how elevated and innovative meals can become through friendship and a shared passion for craftsmanship.

On its heels, NYC-based star chef Lucas Sin collaborated with good friend and Toronto chef Eva Chin to continue the excitement. The chefs, who refer to each other as long-lost cousins, bonded over a shared upbringing, and together crafted an equally inspired menu representing flavours and memories from their childhoods expressed through local ingredients. The fine dining event highlighted the imagination of two of the continent’s most creative culinary minds.

Chef Eva Chin grew up on her grandmother’s farm in Hawaii, where she learned to cook food in “earth ovens” called imu. In the years since, she’s spent time cooking in kitchens all over the world — from Japan to Norway to Australia with a focus on sustainability.

Chef Lucas Sin opened his first restaurant before he could legally drive the streets in his hometown of Hong Kong. After training a few friends, 16-year-old Sin set up shop in an abandoned newspaper factory and served a 13-course tasting menu three nights a week. He is celebrated for his dynamic menus that emphasize accessibility and creativity. Chef of fast-casual restaurants Junzi Kitchen and Nice Day, Sin blends traditional Chinese and Chinese-American dishes to create some “New Chinese favourites,” and continues his passion for the experimental and ad hoc to this day.

Guests got to indulge in a variety of dishes including Chaoshan marinated raw scallops in foraged ramp soy and vinegar, wild sidestripe shrimp roe with duck egg noodles, and rooftop-grown Tokyo bekana cabbage braised in two-year-aged ham fat. To close out the evening, dessert was a nostalgic milk tea with Øresund Porter, black sesame graham, and fresh quark cheese.

The dinners are a continuation of Audi Canada’s commitment and movement towards sustainability. 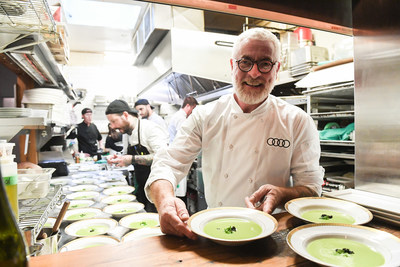 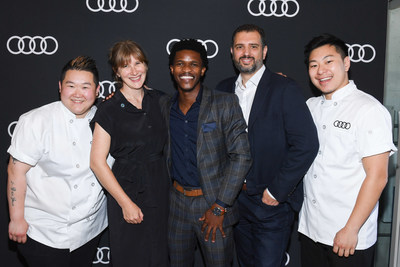 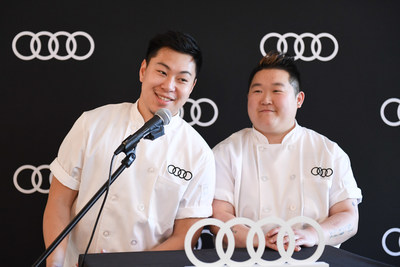