TORONTO, June 29, 2022 /CNW/ – Marineland continues to operate despite facing charges over its alleged use of whales and dolphins for entertainment purposes. The attraction is back in court this morning and with every appearance, highlights the loopholes in animal protection laws across all levels of government. 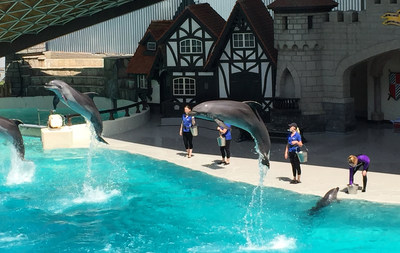 Niagara Regional Police are investigating allegations that a dolphin show occurred over the May long weekend. Section 445.2 of the Criminal Code prohibits the use of captive dolphins in performances for entertainment purposes. Marineland has also banned scientists, lawyers and animal welfare supporters from the property, preventing attempts at holding the venue accountable for its practices.

Marineland, for its part, has stated that the dolphin shows were an educational presentation.

“It is deeply concerning that there are ongoing allegations of illegal conduct by Marineland, and when a business faces charges like this, they shouldn’t be allowed to operate until they have been cleared of the allegations.” said Michèle Hamers, World Animal Protection Campaign Manager. “As for the educational value of ‘dolphin shows’, there is little, if any benefit to turning these intelligent, complex animals into props for our entertainment”.

Marineland is just one of several businesses that exploit animals for entertainment that have been featured on Groupon. Recent research by World Animal Protection found Groupon sells tickets to roadside zoos, including venues that have violated the Animal Welfare Act in the U.S.

“We are asking Groupon to stop selling tickets to venues that exploit wild animals for entertainment and violate the few regulations that exist for animals,” said Melissa Matlow, World Animal Protection Campaign Director. “All levels of government need to pass stronger regulations.”

In Ontario, regulation of exotic animals is left up to individual municipalities leading to inconsistency and regulatory loopholes and resulting in the province having more roadside zoos and exotic animal collectors than any other jurisdiction in Canada. The province has the unfortunate record of having the weakest regulations in the country.

“We are calling on the re-elected Ford government and newly appointed Solicitor General, Michael Kerzner, to step up and follow through on tighter regulations using the Provincial Welfare Services (PAWS) Act,” added Hamers. “To echo the mantra of the government, let’s get it done.”

Federally, the Jane Goodall Act is working its way through the Senate. If passed, it would be the most significant change to animal protection regulations in Canadian history. The legislation would end the commercial trade, breeding and use of more than 800 wildlife species which would have a big impact on roadside zoos, other facilities and businesses being able to use these animals for entertainment.

World Animal Protection has been campaigning for decades to push all levels of government to create regulations in this space as well as banning the keeping of tigers and other wild animals as pets or at roadside zoos.

Valued to be $1.8 Trillion by 2026, Industrial Waste Management Slated for Robust Growth Worldwide