Official Naming Rights partner of home of the Miami Marlins and Official Mortgage Provider of the team pledges $50 for every Marlins run scored at loanDepot park throughout the season – with a special donation increase of $1,000 per run scored by Marlins players at the team’s Home Opener on April 14

MIAMI, April 14, 2022 /PRNewswire/ — Benefitting Boys & Girls Clubs of Miami-Dade, loanDepot, the nation’s second largest nonbank retail lender has announced the return of its “Runs Scored” program with the Miami Marlins Foundation. In its second season as Official Naming Rights partner of the home of the Miami Marlins and Official Mortgage Provider of the team, loanDepot has once again pledged $50 for every Marlins run scored at loanDepot park – which includes a bonus of $1,000 per run at today’s Home Opener. 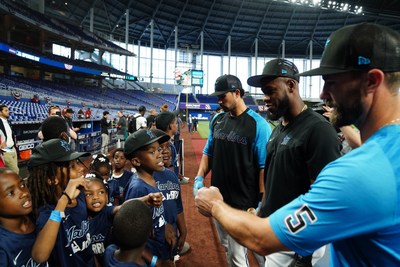 “loanDepot park is our home away from home,” said Freeborn. “We care deeply about the communities where Team loanDepot lives and works, which is why we’re so passionate about supporting those served by the Miami Marlins Foundation and Boys & Girls Clubs of Miami-Dade.”

As a result of more than $16,000 donated by loanDepot through the Runs Scored program in its first year of the partnership in 2021, the Miami Marlins Foundation and Boys & Girls Clubs of Miami-Dade received enough money to fund the creation of two youth baseball and softball teams for 30 kids at the Northwest Club in the community of Liberty City. The teams are part of the Marlins Youth Academy Jr. RBI program, which helps to grow and promote baseball and softball while teaching the fundamentals and life lessons learned through the game. With today’s bonus and an expected increase in runs this season, the program could raise more than $25,000.

“Since joining the Marlins family last year, loanDepot and CEO Anthony Hsieh have stepped up to the plate in such a big way,” said Egusquiza. “With the renewal of the Runs Scored program they’ve given Marlins fans yet another great reason to cheer this season. We’re proud to call loanDepot a partner as they work alongside us to grow the sport of baseball and support those who need it most in our community.”

Amidst the announcement, loanDepot and the Miami Marlins Foundation hosted the Northwest Club’s Jr. RBI teams and their coaches at the Marlins’ 2022 Home Opener. Prior to the game, the kids enjoyed a special pre-game experience where they stepped onto the big-league field alongside Freeborn, and Marlins players Jon Berti, Bryan De La Cruz and Payton Henry.

“Thanks to loanDepot and the Miami Marlins Foundation’s support, we’re able to provide this opportunity for 30 kids, who may not otherwise have the chance to play and learn the sport of baseball – or even step foot in an MLB ballpark,” said Rodriguez-Roig. “The money donated by loanDepot will pay for fundamentals, like equipment, uniforms and coaching staff, things that other communities don’t need to think twice about. Paired with the experience and advice they received today, we’re making a lasting, positive impact on these kids and the community.”

In addition to the Runs Scored program, loanDepot and Hsieh worked with the Miami Marlins Foundation last year to address the immediate needs of the survivors of the Surfside condo collapse, donating $50,000 to the Surfside Relief Fund. The company also hosted community nights at Marlins home games for kids and staff from Boys & Girls Clubs and other organizations in the loanDepot suite.

The Runs Scored program runs in parallel to loanDepot’s “Home Means Everything” RBI campaign with Major League Baseball, donating $25 for every RBI of the season to Boys & Girls Clubs of America and local clubs, including those in Miami-Dade county. That program kicked off with a special $250 per RBI donation during the first two days of the MLB season last Thursday and Friday, raising $29,500.

loanDepot is also the Official Mortgage Provider of MLB and the Presenting Sponsor of the ALCS and NLCS.

About loanDepot
loanDepot (NYSE: LDI) is a digital commerce company committed to serving its customers throughout the home ownership journey. Since its launch in 2010, loanDepot has revolutionized the mortgage industry with a digital-first approach that makes it easier, faster and less stressful to purchase or refinance a home. Today, as the nation’s second largest retail mortgage lender, loanDepot enables customers to achieve the American dream of homeownership through a broad suite of lending and real estate services that simplify one of life’s most complex transactions. With headquarters in Southern California and offices nationwide, loanDepot is committed to serving the communities in which its team lives and works through a variety of local, regional and national philanthropic efforts.