TORONTO, Dec. 10, 2021 /PRNewswire/ – On the heels of an investigation by Last Chance for Animals (LCA), an Ontario police department said this week it is investigating two complaints against Marineland of Canada over how the facility uses whales and dolphins in public appearances. LCA filed a complaint based on concerns that Marineland is violating a provision which prohibits captive marine animals from being used for performance or entertainment purposes. 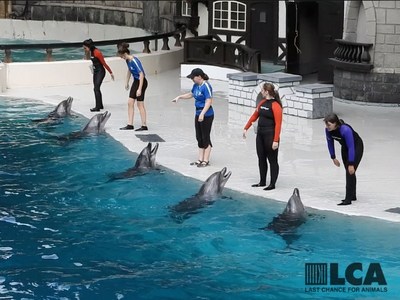 “Canada passed a law in 2019 banning the use of whales and dolphins for entertainment, yet Marineland Canada has continued their shows for the public,” said Chris DeRose, Founder and President of LCA. “Requiring the whales and dolphins to continue performing is a despicable practice that must be stopped, which we were under the impression was the intention of the law. The Ontario police department should be commended for taking the findings of LCA’s investigation seriously.”

The news comes amid calls from LCA for greater transparency about the health of marine animals at Marineland. During undercover investigations, LCA has exposed shocking abuse and neglect at the controversial theme park. LCA has long documented inadequate housing, treatment, and care of the animals and was instrumental in the passage of the 2019 Canadian Bill S-203: Ending the Captivity of Whales and Dolphins Act, which outlawed the keeping, breeding, and capture of cetaceans and prohibits using them in entertainment performances. LCA has inquired numerous times in the past as to why Marineland shows continue to go on. Four government entities have confirmed they have not issued a license to Marineland for the shows.

“Any suggestion that these animals are ’empowered’ is laughable,” said DeRose. “The fact that Marineland calls its animal performances ‘shows’ further bolsters our case that whales and dolphins are being used illegally for entertainment purposes. Exposing these kinds of abuses is why LCA was founded, and we are proud that our work continues to lead to meaningful change.”

ABOUT LAST CHANCE FOR ANIMALS:
LCA is an international non-profit organization dedicated to eliminating animal exploitation through education, investigations, legislation, and public awareness campaigns. Since its formation in 1984, LCA has succeeded as one of the nation’s pioneer animal advocacy groups. LCA’s educational and public outreach programs have empowered the public to make positive changes for animals in their communities. For more information, visit https://lcanimal.org

Against Backdrop of SCOTUS Ruling on EPA, Americans are Unified Around Protecting…

Against Backdrop of SCOTUS Ruling on EPA, Americans are Unified Around Protecting Water…