JINAN,Shandong, Sept. 12, 2021 /PRNewswire/ — On Sept 10, the International Conference on Food Loss and Waste opened in Jinan. Ji Bingxuan, Vice Chairman of the Standing Committee of the National People’s Congress, attended the opening ceremony and read a congratulatory letter from President Xi Jinping. Xi called on countries across the world to take quick and concrete actions to reduce food loss and waste. 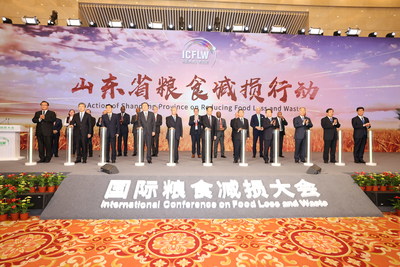 Tang Renjian, Minister of Agriculture and Rural Affairs, Zhang Wufeng, member of the Party group of the National Development and Reform Commission and Director of the National Food and Strategic Reserves Administration, Liu Jiayi, Secretary of the CPC Shandong Provincial Committee, and Li Ganjie, governor of Shandong Province, attended and delivered speeches.

The world continues to suffer from the impact of the on-going COVID-19 pandemic and faces frequent extreme natural disasters caused by climate change. Global food security is facing unprecedented pressure. This year, China passed the “Anti Food Waste law” to regulate the behavior of consumers and the catering industry in the form of law. The aim of the law is to save resources, protect the environment and promote sustainable economic and social development. Grain loss and waste involve in the chains of production, processing, circulation, storage and consumption. He called on all the countries need to strengthen systematic research, deepen exchanges and cooperation in policy, information, science and technology, and accelerate the formation of a joint force for grain loss reduction.

Tang Renjian pointed out that food security is an eternal issue related to human survival and development. The Chinese government will work with other countries to promote food loss reduction. He hoped that all parties improve the international cooperation mechanism, deepen scientific and technological exchanges to get mutual benefit.

Zhang Wufeng said that during the implementation of the “14th Five-Year Plan “, the National Development and Reform Commission and the National Food and Strategic Reserves Administration will play the key roles of planning guidance, Macro management and economic coordination, linking the whole chain, guidance of scientific and technological innovation standards, etc. to reduce grain loss and waste.

With the theme of “Reducing Food Loss and Waste for Global Food Security”, the conference discussed major issues such as international food loss challenges, cooperation, responsibility and governance. More than 300 representatives from relevant governments, well-known experts in the world food impairment academic community and relevant multinational enterprises attended the meeting online and offline.

SOURCE Information Office of the People’s Government of Shandong Province

Boil water advisory in the City of Brossard