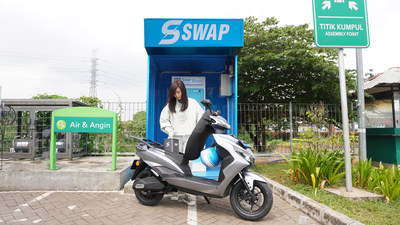 By providing innovation within transportation, the public’s need for mobility can now be fulfilled through electrical motorcycles. This collaboration between SWAP Energi Indonesia and bp AKR Fuels Retail demonstrates their commitment to the social life of the community and environment in Indonesia.

Irwan Tjahaja, founder of PT SWAP Energi Indonesia, states that the presence of Swap Points in bp AKR will become an important access point to electrical motorcycle users as they will be able to swap their batteries within a timeframe of 9 seconds, becoming the solution to range anxiety.

“We warmly welcome the collaboration between us and SWAP Energi Indonesia as an effort to reduce carbon emissions as well to create an eco-friendly environment for the general public. Through this commitment, bp as one of the largest integrated energy companies in Indonesia support battery swapping system (via the SWAP Points) in bp service stations to present a brighter future for the people of Indonesia, as well to collectively achieve our ambitions towards net zero target.” Said Peter Molloy, bp AKR Fuels Retail President Director.

Currently SWAP Energi Indonesia is in close collaboration with SMOOT Motor Indonesia to showcase a “Smart” Electrical motorcycle which is fully integrated with SWAP’s Battery system and application, which is capable of features such as locating battery swapping stations.

Interestingly, SMOOT Electrical Motorcycle users are able to swap batteries in SWAP’s stations completely for free and they won’t have to worry about the batteries as they have a lifelong warranty.

Hurricane Ian: Preparing for evacuation and keeping pets safe and healthy when…

CJ BIOMATERIALS’ Builds on Support for its Polyhydroxyalkanoate Technology at 7th…