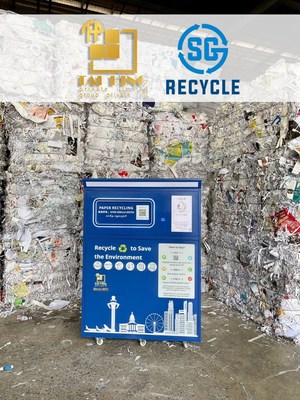 SGRecycle said that it is pioneering a network of SGRecycle smart stations to be placed around Singapore which allows contactless recycling of paper waste by combining built-in sensors and cloud technology, this will potentially increase Singapore recycling rate by 5-10% which has been all-time low since 2019 post COVID-19 situation.

The general public can use SGRecycle station to recycle waste paper for some cash incentive or merchant vouchers. The weight of the waste paper will be calculated by sensors and points credited to their mobile account. “This reduces the risk of COVID infection and also increase the general public awareness of returning their trash for cash as the same time saving our environment together. Everyone plays a part in this eco-system in line with Singapore Green Plan 2030. We hopes for a greener and cleaner Singapore by 2030,” said Mr Looi, Co-Founder of SGRecycle

SGRecycle station, which looks like a gigantic box, can sense and weigh paper waste to be recycled by users. Collection of waste paper are triggered by sensors which makes the trip more efficient and reducing carbon footprint at the same time.

“The ultimate goal is to have all SGRecycle stations islandwide at the most convenient and accessible place, everywhere in Singapore to encourage the nation to practice the recycling habits so that whenever you have waste paper, you know you can recycle to save our environment instead of throwing away,” said Ms JacQueline Lim.

SGRecycle can do this through scalable cloud computing and sensors installed on every station calculating paper waste and points to be credited which is then easily accessible to users. SGRecycle has plans to incorporate more AI & green elements like facial recognition and solar panels in future deployment. The big data could then be analysed via their algorithm on a data wall on recycling trends and user behaviour.

For general enquiries, email us at [email protected]

SGRecycle, a Singapore-based green technology start-up was founded in 2020 by 4 like-minded individuals during the COVID-19 period when the recycling rate in Singapore dropped to 10 years low.