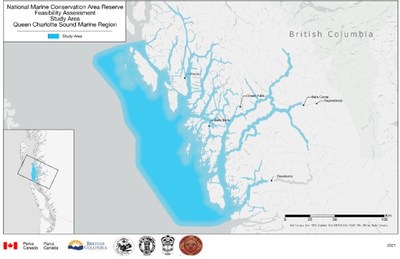 The study area for the national marine conservation area reserve feasibility assessment is about 14,200 square kilometres in size, and located in the coastal and offshore marine waters adjacent to the Great Bear Rainforest on the Central Coast of British Columbia. The study area includes inshore and offshore marine ecosystems, that are adjacent to an intricate shoreline that includes steep walled fjords and narrow channels, island archipelagos, open coast, estuaries, sandy beaches, shell midden beaches, and rocky shorelines. This dynamic environment is home to numerous species of marine mammals, including humpback whales, orcas, sea lions, Harbour and Dall’s porpoises, more than 6000 species of invertebrates, 400 species of fish, 150 species of birds, and some of the largest kelp forests in British Columbia. It is also an important habitat for a number of endangered species including eulachon, abalone, bocaccio, marbled murrelet, and sea otters.

For millennia, the wellbeing of the Heiltsuk, Kitasoo/Xai’Xais, Nuxalk and Wuikinuxv have been linked, inextricably, to the health of the marine environment. Management and use of abundant marine resources, particularly salmon, eulachon and herring, supported ancient civilizations and allowed rich and complex cultures and societies to develop. Archaeologists have dated the origins of village sites on the Central Coast to as far back as 14,000 years – making them some of the oldest continually occupied sites in Canada. Pre-contact, the Central Coast supported some of the highest population concentrations in North America.

Today, community members of the Heiltsuk, Kitasoo/Xai’Xais, Nuxalk and Wuikinuxv continue to honour their responsibility as caretakers of the marine environment. The life blood of the Nations’ communities comes from the existence of a network of diverse and healthy species, populations, and areas. Maintaining and restoring marine ecosystems will support not just Nations’ physical health but is inextricably connected to cultural health and continuity.

The feasibility assessment, led by Central Coast Nations, Parks Canada, and the Government of British Columbia, will use western science, Indigenous knowledge, and the results of consultations with stakeholders including the fishing industry, non-government organizations, and Canadians to consider the social, cultural, environmental, and ecosystem benefits and impacts of establishing a national marine conservation area reserve in the Central Coast of British Columbia. The results of the feasibility assessment will inform future decisions about whether the proposal will continue, including a proposed boundary and zoning considerations.

Grounded by science, Indigenous knowledge and local perspectives, Canada is committed to conserving 25 percent of marine and coastal areas by 2025, working toward 30 percent by 2030. Budget 2021 provided $976.8 million over five years for the establishment and management of new marine protected areas and other effective area-based conservation measures, working with provincial, territorial, and Indigenous governments, and stakeholders.

Based on a model of collaborative governance and management, the enhanced protection of this Central Coast marine ecosystem stemming from a proposed national marine conservation area reserve would help to conserve biodiversity, manage fisheries sustainably, and mitigate the impacts of climate change. Furthermore, it would contribute to maintaining the culture, traditions, economies, and well-being of the Central Coast First Nations, who have long been stewards of these lands and waters.

A national marine conservation area reserve in the Central Coast is considered to be an important element of the marine protected area network being planned for the Pacific Region’s Northern Shelf Bioregion. Parks Canada, BC, and the Heiltsuk, Kitasoo/Xai’xais, Nuxalk, and Wuikinuxv Nations are partners in the development of this planned network approach for marine conservation in the Northern Shelf Bioregion.  Consultation on this broader network process is anticipated later in 2021 with the goal of completing the Network Action Plan by June 2022. Input from consultations will provide important feedback for consideration in the Central Coast National Marine Conservation Area Reserve feasibility assessment process.

"British Columbia’s Central Coast is teeming with life and history. From countless marine species to the rich cultures and histories of First Nation communities, this area is remarkable. I am proud that the Government of Canada is taking an important step today, with the Government of British Columbia, the Heiltsuk, Kitasoo/Xai’xais, Nuxalk Nation, and Wuikinuxv Nation, to protect this treasured place. On top of helping to conserve biodiversity and cultural marine heritage, protecting marine areas also plays a critical role in mitigating the impacts of climate change. Through science, Indigenous knowledge, and local perspectives, we will meet our commitment to conserving 25 percent of marine and coastal areas by 2025, and 30 percent by 2030."

"Our coastal waters are home to an amazing variety of animal and plant life, and it is so important that we work with our Federal and First Nations partners to explore the protection of this area. This agreement will allow us to pursue the conservation of an important ecological area for future generations, as well as protect the habitat of the numerous wildlife that call it home."

"The unique marine environment of British Columbia’s Central Coast is home to rich, unique, spectacular and at-risk biodiversity that has deep historic and cultural significance to Indigenous peoples. All British Columbians care about our coast — it’s a part of our identity —  and know we need to protect its health. It’s vital that all levels of government come together to preserve this area’s irreplaceable marine environment, for now and for the future."

"The Heiltsuk Nation support this collaborative NMCAR feasibility assessment, we look forward to working towards co- developing an approach and process that is complimentary to our Gvi’ilas. Our Gvi’ilas, the laws of our ancestors as the paramount principle to guide all resource use and environmental management. Gvi’ilas refers to our "power" or authority over all matters that affect our lives. It is a complex and comprehensive system of laws that embodies values, beliefs, teachings, principles, practices, and consequences. Inherent in this is the understanding that all things are connected and that unity is important to maintain."

"The protection and sustainability of our marine environment is a priority for the Kitasoo/Xai’xais Nation. With today’s announcement and signing of the Memorandum of Understanding, we look forward to collaborating with Canada and British Columbia on the feasibility assessment for a national marine conservation area reserve, and learning how best to protect the marine environment and the ecological, social, cultural and economic values that it sustains."

"Today’s announcement is an important milestone in reconciliation, co-management, and ecosystem protection on the Central Coast. Nuxalkmc have relied on the rich marine resources in our traditional territories for thousands of years, and as a Nation we are committed to protecting this important region for our future generations. The national marine conservation area reserve feasibility assessment has the potential to help conserve our shared resources and demonstrate true collaborative governance with Indigenous peoples."

"True reconciliation requires strong collaboration and consistent relationship building. Guided by the principle of ńàńakila (to protect and/or keep an eye on) the Wuikinuxv Nation hopes to achieve a balanced approach to marine conservation in important areas and marine habitats along our coast. We believe that the tools provided within the National Marine Conservation Area Reserve framework can help to reach these objectives and allow for joint decision making. It is with these sentiments in mind that we sign this Memorandum of Understanding."