Erik Solheim, former United Nations undersecretary-general who has visited China many times, said he was impressed by the country’s efforts in tackling climate change in an interview with China Daily. 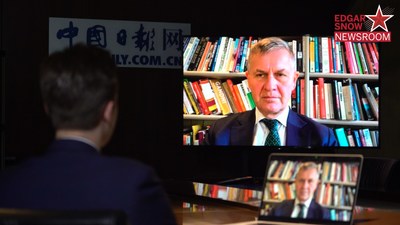 “China’s tree planting is leading the world and it reins in desert in a way no other nation has achieved,” according to Solheim, who is also president of the Belt and Road Initiative Green Development Institute and former executive director of the United Nation Environment Programme.

China’s forest coverage rate has risen from 12 percent in the early 1980s to 23 percent at present. A 2019 study published in the journal Nature Sustainability found that of the 5.2 million square kilometers of vegetation added to the surface of the Earth since 2000, a quarter was contributed by China.Solheim stressed the significance of promise made by President Xi Jinping at the UN General Assembly on Sept 21 that China will stop building new coal-fired power projects overseas. “The driving force of climate action in the world is no longer diplomacy. It’s actions of political leaders,” he said.

China’s green technology also won the applause of Solheim. “Basically on every environment technology, China is leading at scale.”

China’s installed capacity of grid-connected wind power has reached 300.15 million kilowatts as of Nov 14, 2021, double that of 2016, and it has been tops worldwide for 12 consecutive years.

As to the biggest challenges that China will face meeting its goals to peak carbon emission before 2030 and to be zero carbon before 2060, he said the key is to embark upon a fair transition.

“If you are a coal miner in Shanxi, or if you are related to some other old-style industry in Liaoning province, you may not necessarily be very happy to see Guangdong or Fujian moving very fast into solar and wind technology.”

To help those who might not immediately benefit from the green transition, he suggested that China could learn from the European Union by putting a fair transition front and center, to set up some big funds and also train them into the new economy.

He admitted that there is an equity issue when it comes to emission reduction. “The historical climate emissions of the United States are eight times higher than China per capita. So there’s an equity issue for sure and those who have polluted the most should also carry the heaviest burden.”

However, he added that the new green future is an enormous opportunity. “That’s a fantastic opportunity for China and for any other nation in the world to create an ecological civilization.”

“When China can be so successful fighting poverty, of course it can be as successful establishing ecological civilization,” Solheim said.