OTTAWA, ON, Oct. 15, 2021 /CNW/ – This fall, Dairy Farmers of Canada (DFC) is teaming up once again with The Great Canadian Baking Show for the series’ fifth season, which premieres on Sunday, October 17 at 8pm (8:30 NT) on CBC and CBC Gem. As part of this innovative partnership, DFC will work with an influential chef and former participant to showcase the high standards behind 100% real Canadian dairy. 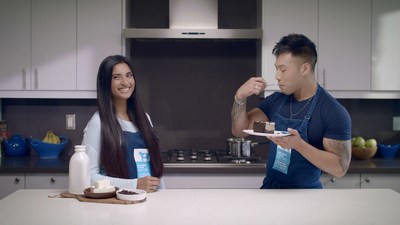 The Great Canadian Baking Show has quickly become one of Canada’s most popular television series. Each week, talented bakers from across the country tackle culinary-themed challenges as they compete to win the coveted title. Read more about this season’s bakers here.

“More and more Canadians are preparing their meals at home these days, and dairy farmers want to help millions of amateur bakers discover the benefits of cooking with dairy,” said Pierre Lampron, President of Dairy Farmers of Canada. “We want consumers to know that Canadian dairy products make such great ingredients because our milk is produced under some of the most stringent standards in the world. Canadians have a great deal of trust in our dairy farmers, the Blue Cow logo, and we are proud to live up to their high expectations.”

A 30-second vignette featuring Mahathi Mundluru, the season 4 runner-up, and culinary and fitness superstar, Wallace Wong (‘the Six Pack Chef’), will air across CBC and as a countdown clock before shows air. As part of the sponsorship, DFC is presenting CBC’s “Bake it with Canadian Dairy” contest and both partners will also share recipes featuring Canadian dairy corresponding to each week’s theme.

For more information, please visit dairyfarmers.ca and don’t forget to tune in to The Great Canadian Baking Show, beginning Sunday, October 17 on CBC and CBC Gem.

ABOUT DAIRY FARMERS OF CANADA
Dairy Farmers of Canada is the national policy, lobbying and promotional organization representing Canadian dairy producers. DFC strives to create stable conditions for the dairy sector in our country. It also seeks to maintain policies that promote the sustainability of Canadian dairy production and works to promote dairy products and their health benefits.

ABOUT CBC/RADIO-CANADA
CBC/Radio-Canada is Canada’s national public broadcaster. Through our mandate to inform, enlighten and entertain, we play a central role in strengthening Canadian culture. As Canada’s trusted news source, we offer a uniquely Canadian perspective on news, current affairs and world affairs. Our distinctively homegrown entertainment programming draws audiences from across the country. Deeply rooted in communities, CBC/Radio-Canada offers diverse content in English, French and eight Indigenous languages. We also deliver content in Spanish, Arabic, Chinese, Punjabi and Tagalog, as well as both official languages, through Radio Canada International (RCI). We are leading the transformation to meet the needs of Canadians in a digital world.