GREAT BEAR RAINFOREST, BC, July 15, 2022 /CNW/ – First Nations with territory in the Great Bear Rainforest and Haida Gwaii are increasing their leadership and governance over $110 million in funds supporting their stewardship and economic priorities – a step forward in decolonizing philanthropy in this region. 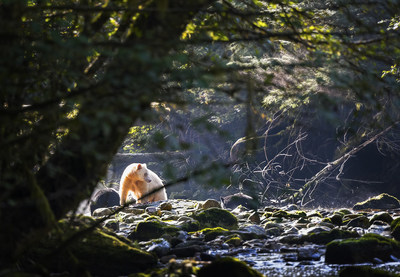 Through changes to the governance of Coast Funds, an Indigenous-led conservation finance organization, several private funders are working through Nature United to reduce their roles and transfer power to the 27 First Nations and regional alliances leading the stewardship efforts that the funds were designed to support.

“These changes are leading the shift to a new standard for conservation that puts First Nations on equal footing with Crown governments,” says Dallas Smith, a member of Tlowitsis Nation and Chair of Coast Funds’ board of directors. “First Nations’ leadership on First Nations’ stewardship funding is the way forward, especially now as Indigenous and non-Indigenous governments come together to protect marine ecosystems and address the climate and biodiversity crises.”

Coast Funds is governed by a board of directors that report to members representing the interests of participating First Nations, funders and Crown governments. In 2007, these groups came together to establish Coast Funds as part of the Great Bear Rainforest agreements.

In a change that was confirmed at an AGM on July 6, the six private funders that contributed to the conservation fund have consolidated their governance roles and relinquished their voting rights as members of Coast Funds. Going forward, this elevates First Nations’ influence over the direction of Coast Funds, giving them equal footing with Crown governments.

Working with Indigenous legal experts, Nature United initiated the process to make these changes, as a member of Coast Funds and the Canadian affiliate of the largest private funder, which raised $39 million to capitalize the conservation endowment fund within Coast Funds. Over the last decade, Nature United has helped establish other large-scale funding mechanisms for supporting Indigenous-led conservation in Canada, and the organization has increasingly stepped back in order that Indigenous peoples take the lead in financial and organizational management.

“This change is more than 15 years in the making, since the creation of one of the first large-scale financing instruments for Indigenous-led conservation and sustainable economic development,” says Hadley Archer, Executive Director of Nature United. “For over a decade, Nature United has continued to learn, evolve, and decolonize our practices. This change takes another step towards increased Indigenous-led management of Coast Funds, while advancing new approaches to decolonizing philanthropic funds. We hold great confidence in the future of Coast Funds, as it will surely enable continued stewardship of this region by Indigenous governments.”

This change comes at a time when First Nations and their partners are considering financial and policy mechanisms that can support Indigenous-led stewardship on the Pacific Coast.

With financing through Coast Funds, First Nations in the Great Bear Rainforest and Haidi Gwaii have invested in 434 conservation and sustainable economic development projects, creating 1,198 permanent jobs, stewarding 5.6 million hectares each year, and supporting 112 businesses, amongst other outcomes.

Coast Funds, created in 2007 as part of the Great Bear Rainforest agreements, is an Indigenous-led conservation finance organization entrusted with funds for First Nations’ stewardship and economic development priorities. Coast Funds is guided by a board of directors (five Indigenous, four non-Indigenous), who report to members representing the interests of participating First Nations and original funders.

Coast Funds was established with a $56-million endowment fund for conservation initiatives and a $60-million seed fund for economic development projects. Today, those funds are valued at $96 million and $15 million, respectively. With this financing, First Nations are building sustainable, local economies and conserving their homelands for the benefit of current and future generations.

Since its inception, Coast Funds’ board of directors has approved $107.7 million towards 434 stewardship, renewable energy, and economic development projects led by First Nations.

Nature United was founded as a Canadian charity in 2014, building on decades of conservation in Canada. Headquartered in Toronto, our organization has field staff located across the country. We are working towards a Canada where people and nature are united, and ecosystems, communities and economies are thriving. Nature United builds partnerships with Indigenous and local communities, governments, industries and other groups to define new pathways towards a sustainable future; to advance reconciliation; and to conserve nature, the foundation of all life on Earth.

We are the Canadian affiliate of The Nature Conservancy (TNC, nature.org), the world’s largest conservation organization, with more than 3,600 staff worldwide, 400 scientists and 1 million supporters. TNC tackles leading conservation threats at the greatest scale to help people and nature thrive, and is working to make a lasting difference around the world in more than 70 countries.