HONG KONG, March 25, 2022  /PRNewswire/ — In a brand-new 30-minute program, CNN’s ‘New Frontiers’ casts a spotlight on Bangladesh and explores how the country is hard at work building on its rich history to secure a brighter future. From business innovations to creative passions, CNN meets the changemakers who – inspired by tradition – have their sights set on new frontiers. 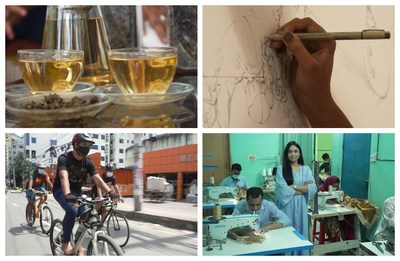 The journey begins by meeting the innovators who are shaking up traditional industries. Bangladeshi scientist Mubarak Ahmad Khan has developed an eco-friendly alternative to plastic shopping bags using a strong natural fiber called jute, and is even working on jute-based personal protective equipment. Meanwhile, Nasir Uddin Khan, manager of a local tea garden in the hilly region of Sylhet, shares his contribution to the country’s tea industry: a brand-new variety of yellow tea which he developed after months of experimentation.

Next, it’s off to the very northern tip of Bangladesh, home to the Kazi & Kazi Tea Estate – the only USDA-certified organic tea garden in the country. CNN hears from Kazi Anis Ahmed, whose family founded the company with a view to help develop and empower the surrounding community. The business employs locals at the tea garden and has set up a dairy cooperative with neighboring residents. Meanwhile, the readymade garment industry is also helping foster societal change. CNN meets Vidiya Amrit Khan, one of the few women running a garment factory in Bangladesh.

The program then explores Bangladesh’s growing bicycle sector with an inside look at the country’s largest bike manufacturer, Meghna Group. CNN hears from Vice Chairman Rashiqur Rahman Mahin about the company’s bike brand Veloce – one of the first Bangladeshi-branded bicycles. The boom of BDCyclists, the largest recreational biking group in Bangladesh, has been integral to Veloce’s success, and has helped cultivate an entire ecosystem based on biking culture.

As the country looks towards the future, a new generation is bolstering the arts and culture sector. CNN hears from Nadia Samdani, a prominent art philanthropist and the mastermind behind the Dhaka Art Summit – one of South Asia’s largest art events aimed at bolstering the work of homegrown creatives. Finally, we meet Dhaka-based designer Sonia Musa, who is part of a growing group of Bangladeshi fashion designers dedicated to high-end tailoring as opposed to the readymade garments the country has traditionally been known for.

CNN’s portfolio of news and information services is available in seven different languages across all major TV, digital and mobile platforms, reaching more than 475 million households around the globe. CNN International is the number one international TV news channel according to all major media surveys across Europe, the Middle East and Africa, the Asia Pacific region, and Latin America and has a US presence that includes CNNgo. CNN Digital is a leading network for online news, mobile news and social media. CNN is at the forefront of digital innovation and continues to invest heavily in expanding its digital global footprint, with a suite of award-winning digital properties and a range of strategic content partnerships, commercialised through a strong data-driven understanding of audience behaviours. CNN has won multiple prestigious awards around the world for its journalism. Around 1,000 hours of long-form series, documentaries and specials are produced every year by CNNI’s non-news programming division. CNN has 36 editorial offices and more than 1,100 affiliates worldwide through CNN Newsource. CNN International is a WarnerMedia company.

Synergy between Smoot, SWAP, Grab, and PLN to support an ecosystem for electrical motorcycles in Indonesia