CITTASLOW: THE FIRST COOPERATION NETWORK WITHOUT BORDERS IS BORN

The first local Cittaslow network in Germany will strengthen the “Sustainability Region of the German Wine Route” (Deutsche Weinstraße) in the future.

ORVIETO, Italy, March 25, 2022 /PRNewswire/ — A network under the umbrella of Cittaslow in Germany is on the agenda. Green light for Deidesheim, Neustadt am der Weinstraße and Maikammer to form a local Cittaslow network in the near future, building on their intensive but free cooperation of the past years, the motto is “cooperation without borders”. And it’s that way for several reasons. On the one hand, Cittaslow, the international association of cities of good living, is itself synonymous with sharing and cooperation between different communities and cultures all over the world, across borders. Secondly, the network project covers different sectors such as culture, tourism, economy, environment and social cohesion. And last but not least, together it is easier to play an important role in the Palatinate Region through synergies and common incentives. 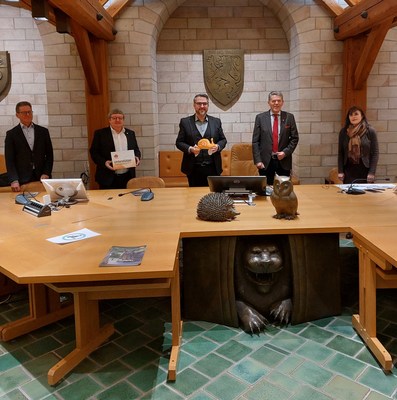 Bringing an idea to life and developing it together

“The Palatinate is strong and we are all proud of our homeland. But it is clear that you cannot succeed in the global world by looking at your own bell tower”, emphasises the mayor of Deidesheim, Manfred Dörr. As Co-ordinator of Cittaslow Germany and Vice-President of Cittaslow International, he is looking forward to “bringing to life and further developing” the first local network in Germany. His aim – together with his colleagues, the mayor of Maikammer, Karl Schäfer, and the mayor of Neustadt, Marc Weigel – is to deepen and expand the relationships built up over more than a decade of collaboration. “In this way, a link is created along the Wine Route (Weinstraße) that helps to spread the idea of Cittaslow throughout the area,” explains Dörr.

The two Rhineland-Palatinate Cittaslow, Deidesheim and Maikammer, are close to each other. The town of Neustadt with its wine villages, geographically positioned in the middle, has been cooperating with its neighbours in the tourism sector for years.  As a Cittaslow Supporter, it brings many foreign contacts into the network, including in the Slow Roero region in Piedmont (Italy) or in the Netherlands. As the headquarters of the Culinary Heritage (Palatinate cultural Heritage) association and with good contacts with the Slowfood Pfalz Convivium, Neustadt is also strongly committed to the promotion of regional products and sustainability. The network idea was first presented to former Cittaslow International President Stefano Pisani and Secretary General Pier Giorgio Oliveti during a visit to Deidesheim in September 2019, and then later to President Mauro Migliorini: next June at the Cittaslow General Assembly in Orvieto (Italy), the German pilot project will be presented and an ad hoc regulatory integration proposed. The project will thus become a model for other countries and the entire international Cittaslow network. The three cities in the Palatinate region are now implementing the various Cittaslow dictates and operational approaches to put people at the centre of urban development and the planning of living spaces.

A number of concrete inter-municipal cooperation projects are already under way. These include projects in the cultural sector. Strong cooperation is developing between the three towns on coordinated cultural programmes, joint marketing of cultural sites, and uniform guidelines for major events such as wine festivals. Other joint priority projects include alternative and ‘soft’ mobility, water supply and outdoor swimming pools for residents and guests, and health care. Other actions concern the increased use and marketing of regional products, and cooperation between restaurants and wineries. The declared aim of the three network partners is to give new impulses and thus further strengthen the sustainability region of the German Wine Route and the Palatinate as a whole.

“SUSTAINABILITY IS THE FUTURE”

Why did the first German Cittaslow network start in the Palatinate?

For more than a decade there has been an intense exchange between Neustadt, Maikammer and Deidesheim. The local Cittaslow network is therefore the logical continuation of the municipal collaboration. The idea of a Cittaslow as a label alone is not enough: it is a matter of internalising the guiding principle and spreading it throughout the area, involving businesses and individuals. The network thus forms a focal point in the sustainability region of the German Wine Route.

What role does sustainability play in all this?

It is an economic, ecological and social balance that has to be continually rebalanced. In the long term, this is the only way forward, and it is as much a challenge as an opportunity. The key insight is that sustainable consumption shouldn’t be considered as a dogma of sacrifice, nor does it require consumers to compromise on quality and experience. On the contrary, sustainability is a quality feature and a competitive advantage because it directly improves people’s quality of life. The opportunities of the post-Covid era consist mainly in quality growth and sustainable offers, which also lead to the development of a successful image. In short: sustainability is the future.