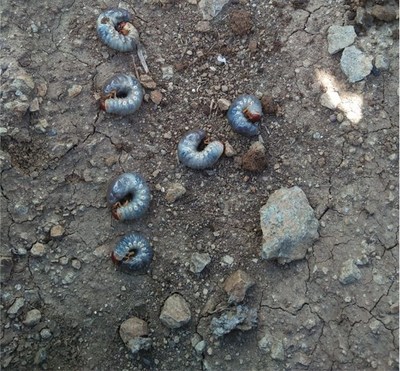 In Asian countries, one of the major pests affecting some of the commercial crops like Sugarcane, Sorghum, Millet, Maize and Chili is white grub. It is also known to cause a major damage in horticultural crops like Pomegranate and Apple. Root crops like Potato and Ginger are also attacked by this pest. In the west, white grub proves to be quite a menace for vegetable crops and lawn grass.

To combat this infestation by white grub and provide farmers with an efficient sustainable biological solution, Aaria Biolifesciences Research Pvt. Ltd. a biobased agri input manufacturer based out of Pune has come with a three–fold attack mechanism using entomopathogenic fungi like Beauveria bassiana, Metarhyzium anisoplaea and Verticillium leccanii.

“The objective was to come up with a sustainable solution to counter the white grub attack which can cause severe losses at a fast pace to the crop. This three–fold solution will prove to be an important component of the Integrated Pest Management module especially for white grub management. This can be easily applied by farmers in whichever way suitable,” said Dr. Richa Nair Co-Founder & Director Aaria Biolife.

White grubs are extremely destructive soil pests known to damage a wide variety of crops. Once established in the field, this pest causes a loss of 25-90% which is pretty heavy for the farmer to recover from. The agriculture department of Maharashtra, India,  had reported infestation of the pest in about 1.54 lakh of the state’s overall 11 lakh hectares cane area in the 2018-19 sugar season.

The sprays recommended to control infestation are of insecticides such as phorate, chlorpyriphos and fipronil-imidacloprid combination. But farmers today are looking for alternates as they do realise the toxic implications of using these chemicals and precautions to be taken. Also, pests have started developing resistance to most of these chemicals due to their overuse since a long period of time.

“To completely eradicate the pest from the farm, it is important to break the life cycle of the pest, which means two or more stages of the life cycle have to be blocked. This three–fold attack mechanism, helps in blocking the pupa and the adult stages of the pest. This mechanism also has an edge over a single molecule use; as all the three fungi have different mode of actions which prove to be more effective due to three different attack points being exercised by the fungi. This being organically certified and the fungi strains being CIB–certified makes it a more reliable approach to be adopted by the farmers,” added Dr. Nair

As almost all fungi produce spores which are like seeds, from which new fungi can be grown, it can also be delivered in farms in a solid form. Availability of a pest solution in liquid as well as solid form makes it more convenient for the end–user as the application can be done as per the resources available on farm, through water lines or through drenching or mixing it in the pre-plantation fertilizer dozes which are applied on farm. After favourable results with more than 20,000+ farmers across Maharashtra, Aaria Biolife has already started entering into large B2B deals with other input providers who want to expand their biological portfolio.

Aaria Biolife is focussed on research, development and manufacturing of organic agri-inputs. They have a range of biofertilzers, biopesticides and PGR products which are focussed on helping farmers maximize their yield, with an eye on overcoming the challenge of sustainability. With a decade of experience, Aaria Biolife serves more than 100,000+ farmers across India through its range of products. Central to their company policy is the aim of sourcing all raw materials from nature which helps in blending  with nature and makes their technologies eco–friendly. Every product is organically certified under NOCA and made in India.