TAIPEI, June 21, 2022 /PRNewswire/ — Since the outbreak of COVID-19, more than 530 million inflections have been reported globally. With the virus still raging in many countries, the world is suffering from supply chain disruptions and decade-high inflation, which has been exacerbated by the rising food and fuel prices due to regional conflicts. Political tensions in the international community also mean no one country can be immune to the adversities mentioned above. In addition, the European Union’s Carbon Border Adjustment Mechanism is scheduled to be implemented with a transitional period in 2023, and it is expected that the United States, the United Kingdom, and Japan will follow suit soon. How would different governments react to the pressure of achieving net zero by 2050? Six laureates of the 2022 Tang Prize, newly introduced to the public in four press conferences taking place from June 18 to 21, have all shown selfless devotion to the advancement of human civilization and the improvement of the wellbeing of humanity. It is, thus, our sincere belief that their outstanding contributions to their individual disciplines and the insightful views they have expressed can bring stability and new opportunities to a world at a critical juncture at the moment. 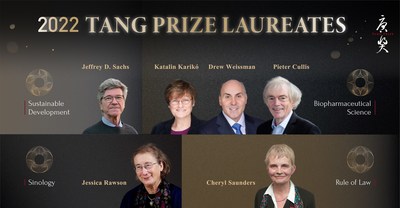 As an eminent economist of international distinction, Professor Sachs has conducted ground-breaking research in many areas, such as debt crises, hyperinflations, transition from central planning to market economies, and eradication of extreme poverty. Moreover, when addressing complex issues related to global sustainable development, he combined the fields of global economics, public health, equity and sustainability to pioneer a multidisciplinary approach to solving these problems, transforming sustainable development into an integrated field of study and practice. His outstanding scholarship, advice to world leaders, educational innovation, and efforts in the global advocacy and realization of sustainable development have proven him to be a true leader of great vision, of profound influence, and imbued with deep humanistic concern.

The Prize in Biopharmaceutical Science went to three scientists who played a critical role in the development of SARS-CoV2 mRNA vaccines: Katalin Kariko, Drew Weissman, and Pieter Cullis, “for the discovery of key vaccinology concepts and approaches, leading to successful development mRNA-based COVID-19 vaccine,” according to the Selection Committee’s citation. The breakthrough discoveries of these three laureates and the ingenious approaches they pioneered are the key to the rapid and successful development of vaccines against SARS-CoV-2. While Dr. Kariko and Dr. Weissman found a way to reduce the immunogenicity of mRNA, Prof. Cullis is credited with designing lipid nanoparticles for the delivery of mRNA vaccines. As a result of their efforts, millions of lives have been saved.

The new platform developed by these three scientists is a nucleoside-modified mRNA based vaccine that can evade the immune system, thus preventing the severe inflammation which occurs when in vitro-transcribed mRNA is recognized by immune cells. These mRNA molecules are encapsulated in lipid nanoparticles and delivered effectively into the cells. They then instruct the cell’s machinery to produce harmless pieces of spike protein found on the surface of the coronavirus and initiate a series adaptive immune response, such as triggering B cells to produce antibodies and training T cells to attack infected cells. These techniques not only revolutionized vaccinology but also signaled a paradigm shift in protein therapy. They represent the advent of a new era of RNA-based therapies. Moreover, they can be applied to tackle a variety of diseases, such as to the development of vaccines against other viruses, of tailored-made vaccines against cancer, of vaccines against HIV, or even of vaccines against allergic diseases.

The Prize in Sinology is awarded to Professor Dame Jessica Rawson, “for her gift and mastery of the craft of the visible to read the art and artifacts of Chinese civilization. By giving voice to the ancient world of objects, she has taught generations how to see when they look at things, and her acuity and vast visual learning have given new insight into the world of the lineages, transformations, and migrations of mute things.”

Her contributions show that, besides the written word, there is another talent, another craft, which, by reading the art and artifacts of the world, allows us to interpret and understand distant and ancient societies, with their beliefs and interactions. Professor Rawson has taken this approach in her study of Chinese bronzes and jades, ancient Chinese tombs, and most especially in the exchanges between the peoples of the central China and their neighbors, for example in horse harness, revealing the role of horse-trading with the steppe and along the Silk Road. She has shown that the many regions of Eurasia had their own traditions, their own visual systems, in which artifacts, their materials, their forms and their multiple ornaments were combined in set ways. In reading these combinations, she has been able to follow and illuminate the transmission of visual systems between Eurasia and China. Most recently, Professor Rawson’s work on the introduction of horses from Mongolia to China has led to new ideas on the origins of the Silk Road. In short, her original and trailblazing achievements in the archaeology of China and Inner Asia have revolutionized and broadened our understanding of early contact and exchange between the East and the West.

Professor Cheryl Saunders won the Prize in Rule of Law, for “her pioneering contributions to comparative constitutional law, and in particular her work on constitutions-building in the Asia-Pacific region.” In the citation, the Selection Committee paid tribute to her working methods, noting that she applies “her scholarship to inspire and advise constitution-making exercises, often under challenging circumstances,” and that she “consistently broadens the boundaries of comparative constitutional law scholarship through active engagement, dialogue and collaboration with scholars and political actors at home and abroad.”

As the first woman to be appointed a law professor at the University of Melbourne, Professor Saunders has been made an officer of the Order Australia, awarded the Australian Centenary Medal, and Légion d’Honneur of France, and granted an honorary doctorate from the National University of Cordoba. Currently Laureate Professor Emeritus at the University of Melbourne, Professor Saunders is not only a pioneer in comparative constitutional studies but also an academic practitioner. She places special emphasis on an inclusive approach to comparative constitutional studies, advocating for incorporating constitutional experience from all over the world into our thinking, which broadens the vision of studies of comparative constitutional law beyond focusing on developments in Europe and North America. Prof. Saunders work is characterized by collaboration with networks of experts and scholars in the Asia-Pacific and elsewhere, bringing community-based talents along the road in countries such as Fiji, East Timor, Myanmar, Sri Lanka, Nepal, the Philippines and Bhutan. Through applied knowledge and experience, Professor Saunders has learnt the importance of prioritizing both national ownership and fit with local context, in the interests of effective implementation. To make comparative insights useful, she works with local scholars and practitioners to organize workshops and forums, to identify priorities, issues and options from local perspective. She has made considerable contributions to countries in the Asia-Pacific and elsewhere in terms of assistance with constitution-building and inspired people who want to change society through constitutional reform.

About the Tang Prize

Since the advent of globalization, mankind has been able to enjoy the convenience brought forth by the advancement of human civilization and science. Yet a multitude of challenges, such as climate change, the emergence of new infectious diseases, wealth gap, and moral degradation, have surfaced along the way. Against this backdrop, Dr. Samuel Yin established the Tang Prize in December 2012. It consists of four award categories, namely Sustainable Development, Biopharmaceutical Science, Sinology, and Rule of Law. Every other year, four independent and professional selection committees, comprising many internationally renowned experts, scholars, and Nobel winners, choose as Tang Prize laureates people who have influenced and made substantive contributions to the world, regardless of ethnicity, nationality or gender. A cash prize of NT$50 million (approx. US$1.7 million) is allocated to each category, with NT$10 million (approx. US$ 0.35 million) of it being a research grant intended to encourage professionals in every field to examine mankind’s most urgent needs in the 21st century, and become leading forces in the development of human society through their outstanding research outcomes and active civic engagement.

GOOD FOR YOU, GOOD FOR THE ENVIRONMENT – NEW CAMPAIGN CELEBRATES UNIQUE AUSTRALIAN PRODUCE