PRINCE RUPERT, BC , Aug. 22, 2022 /CNW/ – Watching whales and other marine mammals in their natural surroundings gives Canadians an opportunity to better appreciate these beautiful animals, but when humans get too close, we risk disturbing and even harming them. Canada has laws in place to ensure that marine mammals can be enjoyed at a safe distance. 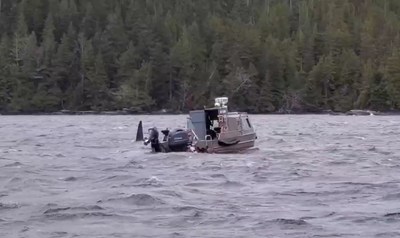 On July 22, 2022, in Prince Rupert Provincial Court, the Honourable Judge Jeffrey Campbell ordered Thomas Gould to pay a fine of $12,000 for contravention of Canada’s Fisheries Act, section 7 of the Marine Mammal Regulations. This is the largest fine recorded to-date for this kind of an offence.

The sentence stems from a incident on April 25, 2020, when Mr. Gould, a scuba diver and owner of a commercial dive vessel, Ice Cube, knowingly interacted with a pod of seven Northern Resident Killer Whales near Prince Rupert Harbour. Evidence collected by fishery officers established that the dive vessel had attempted to motor ahead of the whale pod several times, a practice known as “leap-frogging”. It was also determined that Mr. Gould, in full dive gear, entered the water two different times in close proximity to the whales.

Canada’s Marine Mammal Regulations outlines minimum approach distances for whales, dolphins and porpoises across the country. In British Columbia, all vessels must keep 200 m away from killer whales in BC and the Pacific Ocean and keep 400 m away from all killer whales in southern BC coastal waters between Campbell River and just north of Ucluelet (June 1 – May 31). Under the Marine Mammal Regulations, it is also illegal to swim, dive or interact with marine mammals.

The killer whale pod identified in this incident has been returning to the Prince Rupert area every spring for over a decade. Signage is posted in the area to aid boaters in determining the mandatory approach distances.

Fisheries and Oceans Canada (DFO) has a mandate to protect and conserve marine resources and to prosecute offenders under the Fisheries Act. It ensures and promotes compliance with the Act and other laws and regulations through a combination of land, air, and sea patrols, as well as education and awareness activities.

The Department asks the public to call DFO’s Observe, Record, Report Hotline at 1-800-465-4336 to report occurrences of marine mammals being harassed or disturbed, as well as marine mammal injuries and entanglements. Mariners who are unable to reach the incident reporting hotline can call the Canadian Coast Guard’s (CCG) Marine Mammal Desk at 1-833-339-1020 or report it to CCG marine traffic radio.

Photo used as part of the evidence presented in Court