Michael Jordan’s Rare Bulls Playoff Jersey Could Fetch Up To $1,000,000 At Auction and Will Help Feed Homeless Families in The Chicago Area

SAN TAN VALLEY, Ariz., July 1, 2022 /PRNewswire/ — Michael Jordan’s jersey worn during game three of the 1997 National Basketball Association (NBA) Eastern Conference Finals is expected to sell for as much as $1 million at auction this July at Infinite Auctions. This jersey could possibly end up being the most valuable Jordan jersey ever sold, and a portion of the proceeds will be donated to non-profit organizations that serve the homeless in the city of Chicago. 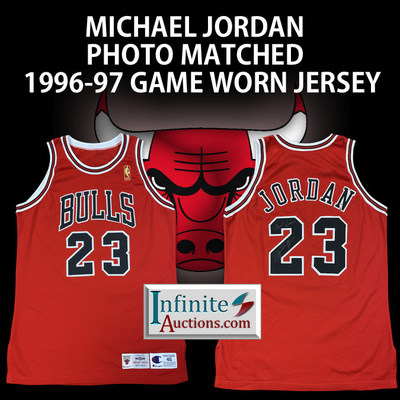 Highly desirable Jordan memorabilia has incredible investment potential as they continue to break previous records. For example, Michael Jordan’s game worn North Carolina jersey sold for $1.38 million at auction in late 2021 after being sold for $63,500 back in 1999.

“This is a museum quality piece that has absolutely everything that a top tier collector could possibly desire, and more importantly a portion of the proceeds will help Chicago’s homeless,” said Marshall Perkins, CEO at Infinite Auctions.

The red road jersey is autographed by Jordan and is photo matched to a playoff game, which featured the Chicago Bulls versus the Miami Heat on May 24, 1997 where Jordan scored 34 points on his way to his 5th NBA title. Jordan’s game jerseys from the 1996-97 season are highly desirable because they display the gold 50th anniversary NBA logoman, and they are very scarce as only a few have been photo match authenticated.

You can view all auction items at www.infiniteauctions.com

Infinite Auctions is an online auction house that specializes in the sale of game worn sports memorabilia and sports cards.