China Oceanic Development Foundation: The Yellow Sea Stays Stable and Well – Results of the Environmental Cooperative Research between the Republic of Korea and China

BEIJING, Aug. 30, 2021 /PRNewswire/ — The Yellow Sea Environmental Cooperative Research between the Republic of Korea and China was conducted in early September 2020. The two sides sampled separately at 18 stations in their respective waters, carried out laboratory analysis and exchanged data, and found the environmental quality of the Yellow Sea good and stable.

The Yellow Sea, a semi-enclosed body of water of about 400,000 square kilometers, is located between mainland China and the Korean Peninsula. It has global significance for its rich marine resources and unique ecosystem.

The project was jointly completed by Korea Marine Environmental Management Corporation (KOEM) and Zhejiang Marine Ecology and Environment Monitoring Center, China. According to Tang Jingliang, deputy director of Zhejiang Marine Ecology and Environment Monitoring Center, the current cooperation model is “investigating separately, analyzing cooperatively”. The boundary line that demarcates their respective areas of water is 124 degrees east longitude, with the Republic of Korea responsible for research in the eastern part, and China in the western part. The monitoring contents include water quality, seabed sediments (seabed mud) and marine organisms. During the 2020 monitoring mission, Korean researchers conducted sampling from September 16 to September 21 while Chinese on-site monitoring team carried out the project along 5 lines from September 8 to September 13. About 20 people participated in the laboratory sample analysis. 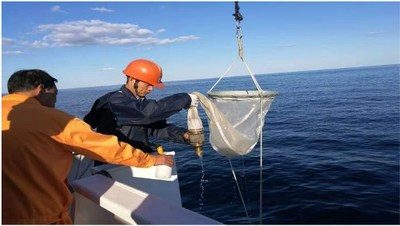 Hu Xupeng is the deputy director of the Marine Office of Zhejiang Marine Ecology and Environment Monitoring Center. Since 2008, he and the monitoring team have overcome many difficulties such as sea waves, seasickness, and physical fatigue, and participated in each monitoring of the project. “The quality of the Yellow Sea has been relatively stable in recent years. The nutrient content is low in the center, while near the edge of both sides it is relatively high. The content of heavy metals is relatively low.” He concluded, “Other contents are obviously better than the national standard, and the quality of seawater is relatively good.”

Jia Haibo, deputy director of the Biology Department of Zhejiang Marine Ecology and Environment Monitoring Center, who has also been working on this project for years, said, “The biological community in the middle of the Yellow Sea remains stable, and the ecosystem is in good condition overall.”

Due to the pandemic, scientists of the two countries exchanged data through emails early this year. The 2020 annual investigation report written by the Korean side was completed in July after two rounds of verification and proofreading by both sides, with ratification by chief scientists. The report is exclusively open to governments of both countries.

Up to now, 18 joint research projects have been successfully conducted. In the early stage, the two sides took turns to send out ships, and jointly carried out investigation, sampling, analysis, and wrote annual reports. The project was suspended in 2009 and restarted in 2015. Since then, researchers from both sides have been investigating and collecting data separately in their responsible waters, communicating on the analytical methods and standards. Official reports are released through annual working group meetings.

The research results over the years show that the overall environmental condition of the Yellow Sea waters remains good, with rich biomass and relatively stable biological community structure. The joint investigation and annual communication mechanism have enhanced friendships and proven to be an effective model for bilateral cooperation.

According to Tang Jingliang, next joint research is scheduled for October, 2022. “With better relations between China and the Republic of Korea, as well as increasing concern for the marine environment and resources of the Yellow Sea, our cooperation is bound to expand,” Tang said, “And we will also focus on climate change, marine microplastics, and other globally concerned marine environmental issues in the future.”