WASHINGTON, Aug. 2, 2022 /PRNewswire/ — Born Free USA, working in partnership with comic artist Brian Ahearn of ZooDraws, has today launched a series of compelling comic strips that tell the stories of individual animals sold into the wildlife trade. While Ahearn’s work is known for its tongue-in-cheek humor, there is little to laugh about in the stories told by his most recent creations. 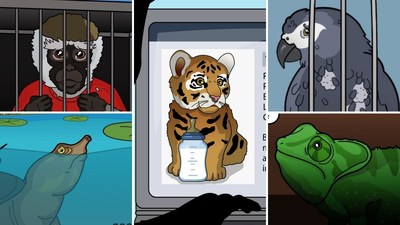 Ahearn said: “Millions of wild animals are sold into the U.S. pet trade every year, and the impact is significant. Not only do the individual animals suffer compromised welfare, but they pose a very real risk to public safety, and the trade causes lasting damage to wild populations. Overall, the trade in wildlife is a disaster for animals, for humans, and for the environment. This is what we hope these powerful comics will help to portray.”

The five comics are drawn in Ahearn’s distinctive style and capture the viewer’s attention immediately. The hope is that they will reach new audiences for the non-profit, whose work centers on the protection of wild animals in captivity and in their natural habitat.

Vervet monkey: An estimated 15,000 individual primates are currently suffering as pets in the United States. Denied the ability to meet their physical, social, and emotional needs, many “pet” monkeys develop stereotypic stress behaviors. Others, like Alex the vervet monkey in this comic, become aggressive as they reach adolescence and attack their owners. A few very lucky ones are rehomed to sanctuaries, but even they struggle to overcome their past trauma. The introduction of the Captive Primate Safety Act, which would prohibit the private keeping of, and interstate trade in, non-human primates would end this cruel trade if successfully passed by Congress.

Tiger: There are estimated to be more tigers kept privately in Texas (5,000) than exist in the wild. Tigers do not make good pets. Not only does the tiger suffer immensely as none of their welfare needs are fully met, but they pose serious risk to their owner and, in the event of escape, the wider public. If a pet big cat escapes, the fallout often falls to first responders, who are not trained to deal with a tiger or lion on the loose. The introduction of the Big Cat Public Safety Act, which bans the private keeping of, and interstate trade in, big cats, would end this cruel trade and protect the public and first responders from harm. The bill passed out of committee in June 2022.

African Gray Parrot: Parrots are one of the animals most regularly trafficked to the United States. After enduring long journeys, often stuffed in tiny spaces to avoid detection, or crammed into crates with no room to move, those who survive are sold into the pet trade. Caging a bird is one of the cruelest things with can do – as doing so denies them practically every natural instinct and need that they have. Parrots live surprisingly long lives – sometimes living into their sixties – so many of them kept as pets will be passed from home to home as their owners grow tired of them, or even pass away. All of this adds up to a miserable life in which stressed birds suffer. Many captive parrots pluck their own feathers – sometimes until they are completely bald.

Chameleon: Stuffed inside a box and sent through the mail: this is how many thousands of animals, and reptiles in particular, are transported each year to be sold into the pet trade. Some are transported from within the United States and others from other countries. Animal deaths in transit are so common that many sellers have replacement policies if the animal arrives dead, or they offer insurance policies to cover the monetary loss to the buyer if their animal dies in the mail. Considered disposable and replaceable, reptiles struggle to adapt to life in tanks and reported mortality rates are high. While stress behaviors (stereotypies), such as pacing, are largely attributed to mammals in captivity, reptiles suffer the same outcomes. One prevalent stereotypy in reptiles as Interaction with Transparent Boundaries (ITB), behavior in which reptiles appear to repeatedly try to “climb” the glass of their tank, before circling away, then returning over and over again.

Asian Giant Softshell Turtle: While many exotic pets in the United States are bred for sale by breeders in-country, some animals are transported long distances from the wild. The demand for the global pet trade can have devastating impacts on both the individuals themselves, and the survival of the species to which they belong. Species such as the Asian giant softshell turtle (Pelochelys cantorii) are endangered in their natural habitat yet still traded as pets.

Said Born Free USA CEO Angela Grimes: “These comics communicate vital messages about the protection of wild animals in a way that is accessible to all. We often think of wildlife trade as something that happens in far-flung places, but the United States is one of the largest importers and sellers of wild animals in the world. We have work to do, and that starts with being properly informed. We hope that these comics will reach far beyond our usual audience and encourage people to think in new ways about the protection – and exploitation of – wild animals.”

The comics are available for view at https://www.bornfreeusa.org/zoodraws and readers are encouraged to share them widely.

About Born Free USA
Born Free USA works to ensure that all wild animals, whether living in captivity or in the wild, are treated with compassion and respect and are able to live their lives according to their needs. We oppose the exploitation of wild animals in captivity and campaign to keep them where they belong—in the wild. Born Free USA’s Primate Sanctuary is the largest in the United States and provides a permanent home to primates rehomed from laboratories or rescued from zoos and private ownership.